Get in touch to find out more about Eddie Edwards 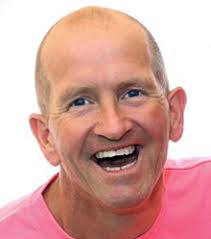 Michael ‘Eddie The Eagle’ Edwards stood in at the last minute to save the event. We have always had former football players in the past, obviously because of being a football club, so it was quite nerve-wracking, wondering how he would be and how he would go down with the crowd.
Why was I nervous? He was outstanding!!
A real gent, who couldn’t be any more helpful, signing programmes and posing for photos (and there was a huge queue for photos)! He introduced a short film, showing his jumps, some really funny adverts and snippets from TV interviews and then gave a fantastic speech about his life and adventures. Unfortunately, there was a period of time where we had to change the batteries in the mic, but he didn’t lose the attention of a single person in the room, his stories were so gripping!
Darryl Cartwright. Lostock Hall Juniors FC. 16.10.17 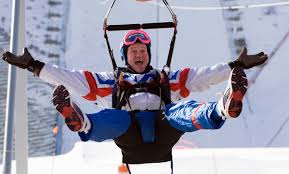 Eddie is the world’s favourite ski-jumper – came back to Britain several years ago after spending three years living and working in Lake Placid, New York State. His stories of how he became an unlikely superstar have had audiences in stitches on both sides of the Atlantic. A former plasterer, Eddie had to self fund his Olympics dream and endeared himself to the public after a series of less than competitive jumps left him in last place. Now a trained lawyer, he works as a sports agent.
Eddie was also recently crowned winner of the hit ITV show ‘Splash’ with Tom Daley.