Get in touch to find out more about Barry York 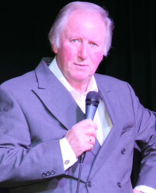 “This is just a quick email to thank you very much for recommending Barry York and booking him at such short notice.

“Just a big thank you from everyone at Newburgh Harrock Utd for getting Barry York for our sportsman’s last Friday evening, he was absolutely fantastic and went down a treat, very very funny man.”

“I would like to thank Barry for his professionalism at our recent leadership event where he compared our awards evening. He had everyone in fits of laughter throughout the evening with his superb comedic timing and witty one liner’s. He added that extra sparkle to the night! I would highly recommend Barry for any future events.”
Ian Currie, Managing Director – Power Transmission and Distribution ,Balfour Beatty Group Limited. February 2017

“Barry York not only provided good company at the table through out the meal but delivered an hilarious after Dinner speech , especially when Geoff Miller OBE, is such a hard act to follow . Barry pitched it just right for the people in the room and his humour was delivered without offending anybody with his material or language. He also volunteered to do the raffle and auction and raised another £1,250 0n the auction which was marvellous.
John Wood, Pool in Wharfedale CC, January 2016

“Barry York was fantastic on Friday Night – really looked at the audience and played to them a treat. He was a gent and everyone was very happy with him”

“A huge thank you for your professional services at our awards night in January…Everyone had a superb evening. I know from bitter experience that our guests have seen off at least one top named entertainer and provided the perfect style required to make the events swing, proffering well timed introductions and made others wish they were somewhere else. By saying that I want to emphasise what a good job you did. Your subtle humour for our speakers and Lenny Henry.”

“We were very pleased with Barry’s performance. Our clients comprised a mixture of senior trade union officials and local MP’s. There were also a significant number of females in the audience. Barry was received very well and we were particularly pleased at his sensitive choice of material which included no racist humour or bad language. Barry produced a repertoire of politically correct but extremely humorous stand up comedy.”

“Many thanks for hosting Westhoughton Cricket clubs annual Sportsmans dinner and providing an excellent comedy slot interacting with guests who were at times doubled over with laughter.
The event proved to be a roaring success with numerous members and guests reporting how they enjoyed the evening and your performance in particular. Your control and delivery over the entire course of the evening proved to make the difference and definitely whetted the appetite to do it again. How good to have such an outstanding entertainer”
Martin Hogkiss, Westhoughton CC

One of the most versatile comedy entertainers we handle, Barry York has certainly built up a reputation as the ideal act for almost any situation.

A stand up comedian, Barry began his professional career fronting a comedy “showgroup.” The act incorporated comedy and music, and whilst Barry has worked as a solo artiste for the past 20 years, concentrating on comedy, up until cutting back recently, he was still capable of performing 2 hours worth of entertainment

These days, Barry works predominantly with the after dinner market. His clean, yet “cheeky” act, combined with his sharp wit are a match for all audiences, whether mixed, or all male. The sportsmans dinner environment, where he particularly excels, has seen Barry work alongside such names as Jimmy Greaves, Jack Charlton and John Conteh to name but a few.