Get in touch to find out more about Mark Beaumont 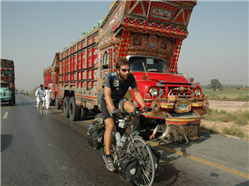 Mark Beaumont is a broadcaster who has been adventuring since an early age. When not travelling and taking part in expeditions he is often speaking at events across the UK. He is also involved in various charity and educational work, book writing and is involved in training for his expeditions.

Mark was first inspired to go on expedition at the age of 12 after reading in a local newspaper about a cycle from John O’Groats to Lands End. For the next decade Mark’s ambitions and experience developed until after leaving University he set out to make a career in broadcasting and adventure (and a very successful one at that!)

Mark’s public speaking is both interesting and inspiring. He has been places that many people can only dream of and enjoys sharing his experiences with others. A truly fascinating character and versatile after dinner speaker