Get in touch to find out more about George Lewis 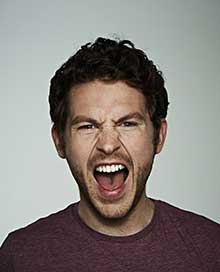 Stockport born and bred, Comedian/Writer/Actor George Lewis is one of the most exciting acts to burst on to the scene in recent years. George is a multi-award winner, having won the Amused Moose Laugh Off, Nando’s New Comedian of the Year, The Brighton Squawker Award, the Comedy Cafe New Act of the Year, the Comedy Knights Fresh Comedian of the Year. In 2016 he was runner up in the prestigious Leicester Mercury Comedian of the Year and beat 700 other comics to reach the final of the BBC New Comedy Award at the Edinburgh Fringe, with his set being broadcast on BBC Radio 4.
In 2016 he was a member of the sought-after Pleasance Reserve at the Edinburgh Fringe and went on to perform in front of 3000 people at the Waverley Care Gala, the biggest event at the Fringe.
Last year George was picked for the Best of the Fest showcase at the Brighton Festival and played to one and a half thousand people at the Brighton Dome. He’s also performed on BBC Radio 4 and regularly appears at comedy clubs up and down the country.