Get in touch to find out more about Steve Shanyaski 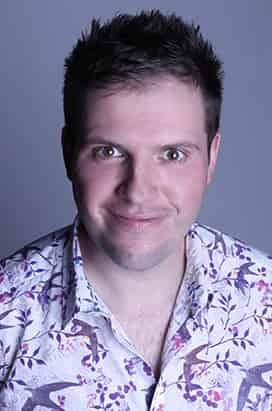 ‘A star in the making!’
City Life

Steve has rapidly established himself throughout the UK as a top choice for all of the major comedy venues & promoters, including the Comedy Store, CSE, Glee Club, and Jongleurs.

Bored of his day job, Shanyaski had an epiphany, walked out the door and straight onto the comedy stage. He hasn’t looked back since. Endlessly charming, Steve’s inherent warmth and cheeky, roguish twinkle shines through his material, elevating him to quite another level as a performer. Within the first six months of his comedy career he made it through to the semi-finals of the BBC New Comedian of the Year, the North West Comedian of the Year Final, and later that year he booked to appear on the BBC7 Radio Showcase “Spanking New”. Since then he has gone from strength to strength, adding to this list of accolades by being named the Holsten Pils Comedian of the Year 2005, and the Birmingham Comedy Festival’s Best Breaking Talent 2005.

Combining surreal observations with wildly tangential imaginings, his off kilter set pieces have audiences fully immersed in ‘Stevie World’ as he leads them, Pied Piper-like down the charming avenues of his inner mind.

Following 2009’s ‘Reality Check’ Steve returned to The Edinburgh Fringe Festival in 2011 with his 4 star-reviewed show ‘Steve Shanyaski’s Life Survival Bible’. A popular choice amongst the late night festival goers, audiences left happy and glowing after an hour of his high energy quirkiness and slick confident routines. This was an opinion shared by critics, who repeatedly awarded him with 4 stars and gushing compliments.

His whirlwind performances and thrilling routines have constantly proven a hit with even the quietest crowds… The key to his act being his energy and silliness.

He has performed his comedy throughout the world: to an audience as diverse as bikers in a field, to royalty in a theatre, and never ceases to go down a storm.