Get in touch to find out more about Dame Ellen MacA 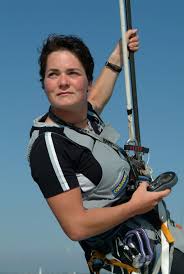 Dame Ellen MacArthur first hit the headlines in 2001 when she raced single-handedly non-stop around the world in the Vendée Globe when only 24 years old. After 94 days at sea, Ellen returned to a different life, she had come second in one of the hardest races in offshore sailing and the response was massive. Prior to her Vendée success, she won the solo transatlantic race from the UK to the USA and went on to win the Route du Rhum from France to the Caribbean in 2002.

After this successful run in the monohull Open 60 class, Ellen turned her attention to the multihull circuit leading to her departure from Falmouth, UK in 2004 on board the 75ft trimaran B&Q… she returned 71 days, 14 hours, 18 minutes, 33 seconds later, having sailed over 26,000 miles to become the fastest person to circumnavigate the globe single-handed. She was knighted by the Queen in 2005 and has received the Legion d’Honneur from French President, Nicolas Sarkozy.

Ellen is renowned for her ambition, professionalism and determination to succeed. Her story is not just about sailing, rather one of human endeavour! Ellen’s way of approaching life – her innovative thinking and the challenges she seeks for herself inspire audiences to make their innermost dreams come true!