Get in touch to find out more about Angela Barnes 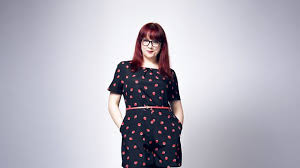 ‘Like all the best comics, she manages to articulate a singular perspective while making it seem like a universal truth. And then she put jokes in it. Harder than it looks’ – The Guardian
‘Brilliantly funny’ – Sarah Millican
‘A beautifully paced performance that was aided by the consistent quality of her jokes, many of which showed a great skill with self-deprecation’ – Chortle
‘Barnes mixes warm autobiographical material with plenty of strong jokes’ – The Guardian
‘This is a lady who is confident in the way she attacks her one liners and punch lines, her easy going manner really drew the audience in’ – Fringe Review

After a career in health and social care, Angela Barnes decided to realise a long held ambition and give comedy a go. Within a couple of years she had won the 2011 BBC New Comedy Award and became a finalist at the 2011 Latitude Festival New Act of the Year competition. Since 2011, Angela and her witty world view have been catapulted onto numerous radio and television shows including appearances on BBC Three’s Russell Howard’s Good News, Russell Kane’s Whistle Stop Tour (BBC Radio 2), and BBC Radio 4’s The Now Show.