Get in touch to find out more about Raymond & Timpkins 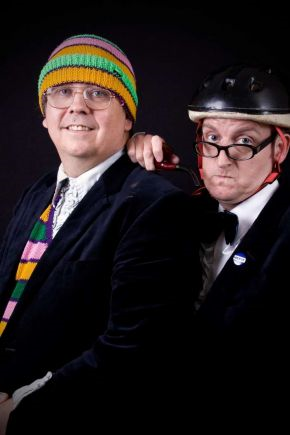 “Absolutely hilarious” VIZ
“A mad, anarchic triumph of stupidity over style. Not to be missed” THE GUARDIAN
“Spectacularly funny” TIME OUT
“Wonderful, innovative and endearing” BRIGHTON ARGUS
“Joyous. Pretty irresistible” CHORTLE
“Their versions of popular hits using just stylophone and acoustic guitar have
to be heard to be believed. Someone should give them their own show.” THE PORTSMOUTH NEWS
“An indulgent set of brilliant tackiness” TAKE 7’ MAGAZINE
“I’ve seen them on Britains Got Talent.” OLD CONFUSED WOMAN IN BINGO HALL>

Cutting their teeth compering and performing in Comedy and Variety nights at The Wedgewood Rooms in Southsea, they watched the nineties as it wafted gently past until, eventually and not before time, London called.

With the fledgling post-fix, “Revue”, added, they blasted the clubs with their Guitar and Stylophone stylings, wowing rooms with super slick prop manipulation, dazzling jaded eyes with sandal based choreography that remains inimitable.

Now, this terpsichorean twosome tour the country, even venturing as far afield as The Falklands and Oman, to provide spiritual uplift to the brave boys and girls of the armed forces.

Their latest foray is into radio comedy/drama. A 1930s murder mystery based in Brighton and a frankly silly retelling of the Jack the Ripper tale, (too soon?) have so far been forged in the red hot fires of their imaginations.