Get in touch to find out more about Naomi Riches 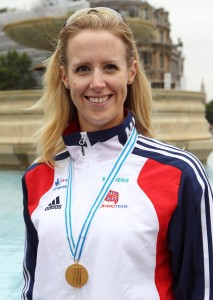 Naomi Riches MBE was only 8 weeks old when she was diagnosed with a visual impairment, but this was not going to stand in her way.
Throughout school the only interest she showed in sport was her participation in her local disabled swimming team. It was in 2004 when Naomi was offered the chance to join Great Britain’s Adaptive Rowing Team that she found her real passion for sport and seized this opportunity. Finally, this was something she could do because of her visual limitation rather than being told she couldn’t because of it.

Over the next ten years Para-rowing developed into a full time Lottery Funded Paralympic Sport. Naomi competed in the Mixed Coxed Four winning six World Championship Gold Medals, a Paralympic Bronze Medal in Beijing and at the London 2012 Games she became Paralympic Champion. As a result of the success in London, Naomi and her crew were awarded MBE’s in February 2013.
It was then that Naomi decided to retire from her International career. She now spends time motivating and inspiring others to push themselves and cease any opportunity that life throws at you.