Get in touch to find out more about Derek Redmond 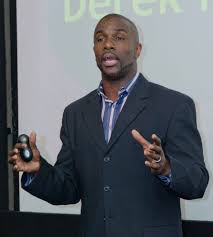 “It all went very well indeed and Derek was excellent!! Everybody I spoke to afterwards thought it was one of our very best dinners. Apart from his talk and Q&A Derek was excellent in getting round and chatting to people. Also, he gave an excellent boost to SportsAid.” – Chris – SportsAid

“Derek was an absolute pleasure to work with, highly professional both in the lead up and on his performance date. His talk was the perfect after dinner speech where he took audience on his personal journey from the heartache to the euphoria with lots of laughs down the way.  Would highly recommend Derek as both motivational and after dinner speaker.” – Citywire

“I would like to thank you very sincerely for your contribution to our KAM Summit, Dubai. It was really uplifting, enlightening and inspiring. This was truly one of the key highlights of our event. Not only your ambition, passion and determination is commendable, but your true spirit of “inspiring people and changing mindsets: From world class to world’s best is highly regarded and appreciated, once again, thank you so much for your remarkable contribution” – Khaled, Johnson & Johnson 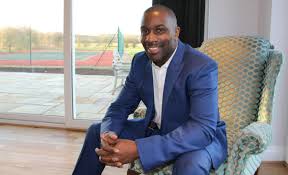 Derek Redmond is an outstanding Olympic champion. Derek broke the British record in the 400m for the first time 1985 in a time of 44.82 seconds beating the 10-year-old mark set by David Jenkins. He then in 1987 reclaimed the record from Roger Black in 44.5 seconds and held it until it was finally broken in 1992 by a mere 0.03 100’s of a second.

As well as being a world record setter, Derek also won a number of competition and medals. He was Commonwealth & European Champion in 4 x 400m Relay in 1991, World silver medallist in 1987 and World Gold Medallist in the 4 x 400m Relay in 1991, setting yet another British European and Commonwealth record and also running the second fastest time ever recorded for the 4 x 400m.

Derek’s increasing career was halted by a serious injury. He endured no less than 13 operations on his Achilles tendons and knees which finally forced him to pull out of many major competitions.

Derek draws on his vast experiences as an international and Olympic sportsman to provide a fascinating and inspirational platform for his motivational speeches. In telling his story, Derek takes the audience on a emotional roller coaster, in giving away his secrets of success along with those to survive and succeed in a team.