Get in touch to find out more about Paul Zerdin 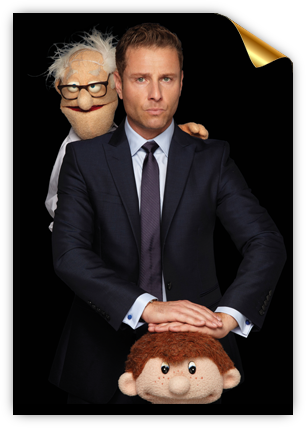 £10000-£15000
Book this act
“Technically immaculate, it’s what he does with his slick talent that really sets him apart. His relationship with the characters has all the dramatic tension of a real life double act” –The Guardian "Pure audience gratifying magic” – Time Out “It is Zerdin’s sharp script that is the heartbeat of the show” – The Times

Zerdin made his TV debut as a magician on the BBC’s Tricky Business and shortly afterwards, at the age of just 20, landed a two year contract presenting the Disney produced kids’ programme Rise and Shine for GMTV.
In 1996, Paul was the first outright winner – by over 100,000 votes of LWT’s The Big Big Talent Show, hosted by Jonathan Ross. The experience not only raised his profile, but introduced him to Nigel Lythgoe, the man who would go on to create reality shows such as Popstars and American Idol.
Lythgoe took the 22 year old Paul under his wing, paving the way for appearances on scores of shows, Tonight at the London Palladium, and Generation Game among them. It was Nigel who gave Paul his first brush with Royalty when he secured him a spot on the Prince’s Trust Gala Show in 1997. “That was a totally surreal experience”, he laughs. “I was sharing a dressing room with Julian Clary, Alan Davies and Frank Bruno with The Spice Girls next door”.
By the late nineties it was obvious that traditional variety shows were losing their appeal and it was then that Zerdin decided to introduce stand-up into his routine, a decision that has paid off handsomely.
From Ray Alan through to Keith Harris, ventriloquists have been a staple of UK entertainment for years, but it has taken Paul Zerdin to bring his mix of stand-up and ventriloquism to the forefront of contemporary entertainment to truly put ventriloquism on the comedy map and crucially, Paul Zerdin appeals to both comedy club and mainstream audiences in equal measure. The UK’s number one ventriloquist’s career has included appearances on everything from the Royal Variety Performance, Paramount and Comedy Central’s, The World Stands Up to ITV Daybreak, BBC TV’s The One Show, Sky News and Jason Manford’s Comedy Rocks.