Get in touch to find out more about Nigel Ng 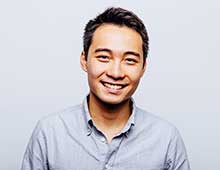 ‘Natural funnybones…as slick as they come’ – Chortle
‘Plenty of good lines… keen observer’ – beyondthejoke.co.uk
‘Top notch… oozed likability and the audience loved him from the word go… stole the show’ – The Stand

Nigel Ng grew up in Malaysia, lived in America for five years and moved to the UK in 2015. Having started his comedy career in Chicago, he’s relieved that (most) people in the UK get his jokes too, as evidenced by him winning the prestigious Amused Moose Laugh Off 2016 and being runner up in the Laughing Horse New Act of the Year 2015.
He was also a finalist in the Leicester Mercury Comedian of the Year (2016) and Leicester Square New Comedian of the Year (2015) competitions, and now can be seen performing in comedy clubs across the UK.