Get in touch to find out more about Mick Miller 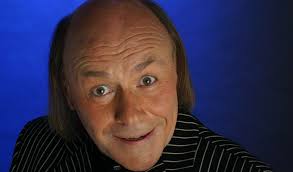 “Mick Miller is in my top 3 comedians of all time.”

“Mick has always been one of my favourite guests.”

Mick Miller is often refered to as a comedy legend, a term which he finds difficult to accept, because those that know him will tell you that he is a modest, unassuming “normal” bloke. It’s when he’s on stage in front of an audience that he comes to life.

He is often refered to as “The bald guy with the log hair” and that unusual hairstyle has been his trademark since he started in comedy in the mid 1970’s. Amazingly, when he recently appeared in the ITV series, “Last Laugh in Vegas”, the American show producer told him to get his hair cut, which started the Twitter #SaveMickMillersHair campaign.

He learned his trade as a Pontin’s Bluecoat and has many fond memories of those days. After Pontin’s he worked hard in the UK working men’s clubs, where he work hard on his act and eventually got his big break on the ITV Talent show, “New Faces” where he won his heat. After that, he became a regular on the iconic TV show, “The Comedians” and the rest is history. He became a regular on our screens and continues performing live all over the world.

In 2011, Peter Kay asked for Mick to appear on the Royal Variety Performance that he was hosting. When the show was televised, Mick was trending worldwide at number one on twitter. He has appeared as Johnny Vegas’ father in the BBC 3 sitcom, “IDEAL” and also featured in an episode of “Peter Kay’s Car Share”. “I’ve loved every minute of my career” says Mick, “but one of the highlights has to be performing in Las Vegas. It completed the holy trinity of showbiz for me. I have now performed at The London Palladium, The Royal Variety Show and finally, Las Vegas.”

Comedy has evolved over the years and so has Mick Miller. He is equally at home entertaining on board cruise ships, performing at Corporate Functions, Theatres, Cabaret Clubs and the new style Comedy Clubs.