Get in touch to find out more about Johnny Herbert 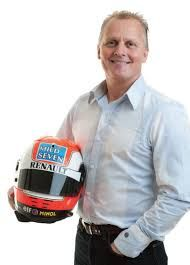 Johnny starred in Formula Ford before Eddie Jordan signed him for Formula Three in 1987 and he promptly won the British title.
Peter Collins signed him for Lotus for 1990, and there Johnny stayed until 1994. A move to Benetton in 1995 was seen as his big chance, but the team focused on Michael Schumacher. Johnny inherited wins at Silverstone and Monza, though, to end up fourth overall
Since his farewell season in 2000, Johnny has starred in sports cars, racing for Audi in the US and finishing second at Le Mans for Bentley in 2003. Johnny was lured back to Formula One in 2005, as sporting relations manager for Jordan.