Get in touch to find out more about Ivan Brackenbury 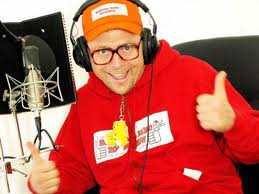 “Intelligent, magical, fantastically original and funny enough to kill you from asphyxiation”

“Binns has his character absolutely nailed, and mines the comic seam ruthlessly to create top-quality entertainment with practically universal appeal.”

Inept hospital radio DJ Ivan Brackenbury is the creation of Tom Binns, a former breakfast radio host on London’s XFM as well as a comedian in his own right.

As himself, Binns won the Jongleurs new act of the year, piloted his own chat show on Five called Tom Binns Munchies, and was one of the presenters on Channel 4 breakfast show RI:SE. He’s also appeared on Knowing Me Knowing Yule With Alan Partridge, Friday Night Armistice and Fist Of Fun as a comic actor.

He created Brakenbury relatively early in his career. However, Brakenbury was resurrected for the Edinburgh Fringe 2007, where he was nominated for the if.comedy prize for the best show, and his roadshow, complete with inappropriate records and bungled cues, is now a regular fixture on the live circuit.